Scott Morrison is having a crisis that has penetrated into everyday real-people conversation. This is a moment in which the PM’s relationship with quiet Australians is genuinely in play.

There’s no sugar-coating it, the Coalition is having a political crisis. A proper one, not just a Twitter beat-up; a multi-headed crisis that won’t die easily because it is about the unrenovated sports clubs people gather in, the town communities that must come together to rebuild after catastrophic fires, and the fear of the coronavirus making schools and universities feel unsafe. 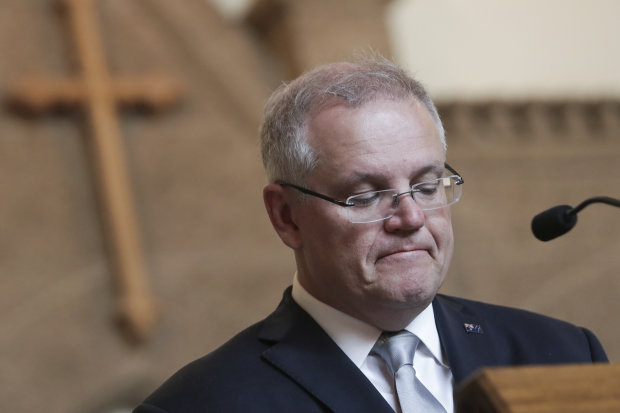 The Coalition’s crisis originated in events outside its control, but it has revealed a crisis of meaning at its core. Alex Ellinghausen
Scott Morrison is having a crisis that has penetrated into everyday real-people conversation, the sidelines of sports matches, the school gate, the sandwich shop queue, the water-cooler, the Facebook mummy groups, the family WhatsApp chats.

They may not be talking about the Prime Minister’s leadership style or his communication strategy outside the Canberra bubble, but this is a moment in which the PM’s relationship with the quiet Australians is genuinely in play.

If every crisis there is an opportunity; the opportunity here is for the Prime Minister or another strong leader to forge a deep connection with a nation fed up with political games.

Instead we have been served more spin, tactics and minor-party leadership jostles.

It might feel like the wrong time to sit down and philosophise about core values, but you can’t guide a crisis without them.

The truth is, neither of the major parties has spent enough time thinking about what it is for. The Coalition has been in campaign mode for the better part of a decade.

The Labor Party was sent into an existential funk by the last election and has still not recovered. Even broaching the topic of values causes political dyspepsia.

For instance, in the lead-up to Australia Day, when Tanya Plibersek suggested that all schoolchildren should make the same pledge of allegiance to Australia as new citizens.

The simple and elegant promise reads: “I pledge my loyalty to Australia and its people, whose democratic beliefs I share, whose rights and liberties I respect, and whose laws I will uphold and obey.”

The opposition education spokeswoman, who is often accused of being an archetypal inner-city leftie (Labor Party polling shows that she doesn’t resonate outside of urban centres) found herself – however briefly and awkwardly – the darling of the right, while the unelected left rained invective on her proposal.

As the abuse mounted, Plibersek attempted a clarification, tweeting: “Patriotism, like mateship, is about solidarity. It’s about what we owe each other as citizens.”

Solidarity and what we owe each other as citizens sound remarkably like traditional Labor values. Solidarity forever, as the union anthem goes, is what makes us strong. But her own political side howled her down for her positive attitude towards patriotism.

Social democracy has lost many universal virtues as it trundles down the divisive path of intersectionality and phobias, but the loss of patriotism might be the greatest.

“By actively undermining a shared sense of belonging, they have accelerated the decay of the reciprocal obligations on which our well-being depends,” argues British development economist Paul Collier in The Future of Capitalism.

The virtue of patriotism still sits comfortably with conservatives, who are able to use it to reach out beyond the poles of politics and to connect the urban elites with the place-anchored voters of the regions – what David Goodhart calls the “somewhere” and “anywheres”.

“Make America great again” is Donald Trump’s best known policy. British Prime Minister Boris Johnson has taken pains to thank voters in the north of England, who voted Tory for the first time in their lives, for the “lend” of their vote.

Johnson understands the significance of a loan that breaks with generations of tradition. The most significant hurdle to forging a new political faith has been cleared.

Collier believes himself to be on the left of the spectrum, but in many ways his 2018 book reads like a policy platform for Johnson’s post-Brexit government.

Some Australian Liberals and conservatives are still horrified by the degree of economic intervention Johnson proposes, or by his accelerated emissions reduction plan, but they can appreciate his approach to immigration and nationhood.

In Britain the libertarian ministers have sniffed the wind and embraced a state that does more, not less.

It remains to be seen whether these enthusiastic new tree-Tories will remember why big government so often stumbles, and whether there is even room for that discussion in Johnson’s party room.

As Australia drifts in the wake of overseas conservative alignments, the new logic must be reckoned with here, too.

Recently successful leaders tend to feel that they’ve transcended the philosophical debate. Morrison is learning how wrong that is.

The Coalition’s crisis originated in events outside its control, but it has revealed a crisis of meaning at its core.

The Labor Party has all the time in the world to get its head screwed on straight before the next election, but what the Liberal Party does now will define this government. It’s time for more meaning and less marketing.

Sometimes in a crisis you’ve just got to stop and think for a while.