It will not be enough to announce a prudent pragmatic approach to climate change. The Prime Minister will also have to find a way to satisfy the fanatics on both sides of the climate wars.

“This will be Exhibit A in the coming climate trials,” Greens MP Adam Bandt tweeted, above a photo of Liberals celebrating the passing of the Carbon Tax Repeal Bills. Assuming his goal is consensus on the need for climate action, he just set the cause back significantly. 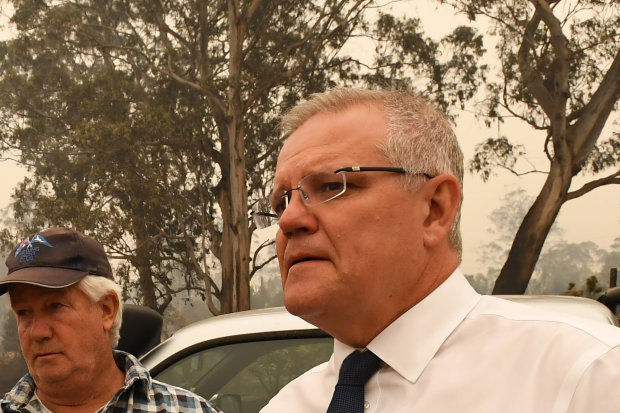 Setback: the Prime Minister will need to to mount a political recovery following the bushfire disaster. AAP

Historically, the formulation is chilling. And there were plenty of long memories around to remind Bandt of the retributive Stalinist show trials at which dissidents were forced to confess to fabricated crimes, and to call up echoes of the George Orwell’s 1984: “We do not destroy the heretic … we convert him, we capture his inner mind, we shape him.”Bandt did not invent the spectre of climate trials himself. Catriona McKinnon, Professor of Politics and International Relations at the University of Reading in the UK, has tried to coin the term “postericide” (posterity plus -cide) to hold to account “the people in positions of authority in states, or industrial groups whose lies have put us and our descendants in peril”. Her argument appears in the UNESCO Courier and a number of academic journals. The clunky “postericide” has not caught on, but the trials have found a cohort of supporters, who hiss the threat at ideological opponents.They overlap with groups who see urgent climate change action as a way to dismantle capitalism. This strain of thought broke cover when US Democratic Senator Alexandria Ocasio-Cortez‘s chief of staff told The Washington Post that the Green New Deal “wasn’t originally a climate thing at all” but a “how-do-you-change-the-entire-economy thing”, a sentiment echoed by Greta Thunberg when she condemned the UN’s “fairytales of eternal economic growth”.Together with the quasi-religious Extinction Rebellion movement, supporters of the economic restructuring and climate trials are highly committed Believers; people for whom the incontrovertible truth of man-made climate change has become an integral part of their identity and extreme responses seem justified, worth casting aside or destroying the gains of liberal democracy to pursue.Of course, most people who accept the reality of climate change are not threatening to wring confessions out of those who are or have been imperfect environmental stewards, or for that matter to trash the economy. However, it is important to understand that these extreme ideas have contributed a significant barrier to action on climate change.At the other tip of the political horseshoe, the other barrier. Here, the belief that man-made climate change does not exist has become a cornerstone of identity. Denialists have taken reasonable scientific doubt and built an edifice of alternative interpretations that has split away from a proper scientific approach by becoming absolutist. They require a continual repetition of allegiance to the belief that there is no man-made climate change. For a belief it has become, and as such it is resistant to evolving scientific knowledge.The Prime Minister won the 2019 election by eschewing the culture wars, but the bushfire crisis has thrown him into their climatic epicentre: stuck between two competing belief systems which are wholly persuaded of their righteousness, but which must be navigated in order to achieve a pragmatic political and policy response beyond the immediate crisis, as Australia rebuilds.Understanding these extremes can help us understand the barriers to action. It will not be enough to announce a sensible course, based on the precautionary principle and balancing economy and action.

Philip E Tetlock, who has researched forecasting and cognitive flexibility over decades and authored seminal works on how people change their minds – or not – compares beliefs commitment to the children’s game of structural soundness: “Our beliefs about ourselves and the world are built on each other in a Jenga-like fashion.” It is easy to remove the blocks that are higher up in the tower, but much harder to remove a block that is lower in the structure, “sitting next to a block of self-perception” near the tower’s core.Challenging a core belief causes people to double down, to get angry, to lash out. It can topple prime ministers. The slim chance there is of modifying beliefs that have become part of a person’s identity is to find a way to compromise without destroying the tower. This will require an olive branch to be reached out in each direction – an opportunity for the extremes to come together without losing face.This is not the challenge Scott Morrison signed up for, but this is the challenge that chance has dealt him. It is in many ways the exact same task that Anthony Albanese faces in building a bridge between middle Australia and an activist base within his own party.In this case, the olive branch must be science: fraught with doubt, continually evolving, sometimes wrong. It is all we have, as well as the best we have, for understanding the devilishly complex world around us.Faith belongs in church; in the science there is only uncertainty. And to manage uncertainty we need to take sensible precautions. It’s time we came together to discuss what they are.