The COVID-19 pandemic is a wet market for central planners. But road maps for exiting the crisis are meaningless when there are no perfect or final answers.

Nobel prize-winning physicist Richard Feynman famously said, “I would rather have questions that can’t be answered than answers that can’t be questioned.” As the coronavirus response becomes routine, citizens used to regarding themselves as free are restlessly questioning the length, extent, and logic of their confinement. These are good questions and should be asked. Governments are also asking themselves the same questions and their decisions are neither perfect nor final. END_OF_DOCUMENT_TOKEN_TO_BE_REPLACED

There is a tipping point at which suicide, alcoholism, and domestic violence becomes too high a price in an all-out fight against COVID-19.

This article first appeared in the Australian Financial Review on 1 April 2020.

When Greta Thunburg told us “I want you to panic”, she wouldn’t have imagined that on the anniversary of her Davos appearance a deadly new virus would be leaking out from China that would grant her wish.

The world has panicked. Country after country has locked itself down. Economies are sliding into recession. The governments of democratic countries have assumed draconian powers to tackle the emergency. Wherever COVID-19 has travelled, Chinese Communist Party-style social control has followed close after. We are doubly infected. END_OF_DOCUMENT_TOKEN_TO_BE_REPLACED

The world is awash with money as governments everywhere fire up the printing presses. How well it is targeted will determine whether the aftermath is a debt hangover or an economy with stronger foundations.

According to the latest Roy Morgan figures, more than 60 per cent of all Australian businesses are feeling the effects of the COVID-19 downturn. Some industries, especially tourism and travel, are catastrophically hit. Others are feeling the flow-on effects of reduced demand for their services by the most affected sectors. Eventually almost all businesses will be forced to confront the challenges of the downturn. Redundancies are inevitable. END_OF_DOCUMENT_TOKEN_TO_BE_REPLACED

The virus is revealing and exacerbating existing national and international tensions. The Schengen dream of a borderless Europe has been under strain over the past few years; Brexit was only the most visible revolt against its supranational vision. Now the borders of Europe are creeping back into place, this time in the name of public health. END_OF_DOCUMENT_TOKEN_TO_BE_REPLACED

There is an ‘implicit political subsidy’ on renewable energy 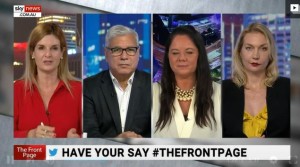