Hiring and paying staff reveals an error-generating nightmare of red tape that is ripe for sensible reforms.

The big reforms of the Hawke-Keating era may be in the bag, but there’s plenty of room for improvement in the Australian economy.

Australia has one of the most complicated award systems in the world, says workforce software company Kronos. There are  112 Modern Awards, as well as company-specific enterprise bargaining agreements. The Australian Payroll Association estimates that it costs the average business with under 200 employees about $36 per payslip, or $86,000 a year based on a monthly pay run. Even just getting these employees into the system is an odyssey of paperwork, prone to human error, which costs businesses and employees valuable head hours. And then each employee’s rate is affected by changing variables like the time and day of the week that employees log on and off, their breaks, their age, and their attainment of various certifications.

Payroll software is big business, used by about half of all employers; that very fact points to the difficulty of working out the exact entitlements for each employee. Even once the software is in place, Kronos warns it’s not a matter of set and forget. New regulation and changes to awards mean that the settings have to be constantly updated by an expert.

END_OF_DOCUMENT_TOKEN_TO_BE_REPLACED

How can employers get away with swindling workers at a time when unemployment is so low?

And, to continue with the blindingly obvious, if customers can’t afford to buy your product, you won’t survive in business.

Here’s a third undeniable statement: businesses go bust all the time because the cost of goods, labour and overheads exceeds the value of the product to the consumer.

That’s the ruthless calculus of wages, employment, and profit that Australia’s 2.3 million going concerns make every year. Especially the vast majority, which are small to medium enterprises without the ability to carry or shift tax liabilities.

Perhaps the underpayment is accidental in the high profile case of MADE Establishment group on restaurants, where George Calombaris is one of the directors. The company has admitted to underpaying his staff $7.8 million. Then there’s the restaurants fronted by Neil Perry, that have been accused of underpayment and exploitation. And the case a result of an honest attempt to deal with an extremely complex award system in the case of Justin Hemmes, who faces a multimillion-dollar lawsuit for underpayment. Or perhaps it is systematic, as suggested by the Fair Work Office raids of 489 businesses in regional NSW and Victoria, which found that 47 per cent were either paying workers less than the minimum hourly rate, or not paying the correct penalty rates.

Whichever it is – we could never presume to know all the details of those allegations – other proven cases of wage theft demonstrate that some business owners choose to fudge costs rather than close the business, or accept a lower profit to themselves. And their employees play along.

It’s definitely not legal, it’s probably immoral, and it certainly seems silly when they’re caught. The law is the law and the cases should be prosecuted to enforce the rule of law.

But why is this happening in an economy that is considered to be at or close to “full employment”?

The trouble is, it seems, that most people, especially those in government or public sector roles, have never needed to work out a sale price. So here’s a quick rundown on how it’s done. The price of a product or service is determined by the cost of goods that go into making it, plus the cost of labour, and the cost of overheads, like rent and bookkeeping. At some point along the chain the business owner adds a mark-up in order to make a profit. In micro-businesses, that mark-up is often what the business owner ends up getting paid. The number of units of product or service the business can sell equals profit. If the product doesn’t sell, or sells for less than the total of the input costs, the business makes a loss.

Which brings us to an important point that tends to get overlooked in this debate: the labour costs businesses pay are an exchange for value. Or, to be more precise, money – dollars and cents – is just a way to exchange your time, effort and skills for things you want. Personally, I love the economist’s term “fungible”, with its Latin root of “enjoy”, which describes the way money is just a token replaceable by another identical item. So let’s say that money is a fungible unit of value – or when it’s given to you in wages, of your value-add.

When unemployment is low, people who add value find it easy to get a job. When unemployment is high, you get the Harvey Norman effect – where skilled workers like computer technicians and programmers have to take jobs in sales, for less money than they’d command in a tighter labour market.

If businesses are offering, and workers are accepting less than the minimum wage, something must be going on.

The Reserve Bank of Australia, bless its bureaucratic heart, is beavering hard to sort through the issues. It recently “highlighted the roles of market dynamism and labour market fluidity in the determination of wages”.

Or in other words, we all need to pull a finger out.

The RBA adds: “Policies that improve human capital will be essential to future wage growth, as knowledge-based work and artificial intelligence technologies become more important contributors to our economy”.

That is, we need to educate and train people to be more useful. Regulation and enforcement will only go so far toward balancing the books on high wages, and open economy and stagnant skills. Of course, we should all condemn wage theft. But to solve it once and for all, we will have to take a look at the wider policy context. 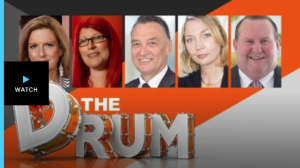 The panel discusses an Access Economics’ report says Australia’s economy will be saved by stimulus, the government’s decision to reduce deeming rates, farming in Australia and the PM has been invited to the White House for a state dinner