In thinking about alternative facts and conspiracy theories lately, a bizarre take on from 2013 sprung to mind, featuring me and Thought Broker as players in a vast right wing conspiracy for putting on ideological spectrum debates which included dry economic ideas. Thanks Andrew Clarke – I always wanted to be a chief operative in a warrior cabal

Just remember that things can be accurate in point of fact but not necessarily therefore in conclusion.

Since US President Trump’s inauguration in January, political signalling has escalated rapidly, with politicians around the world responding to Donald Trump’s strong man image with inflammatory words.

There are a number of reasons why this is particularly counter-productive:

British PM Theresa May, on the other hand, has shown the world how effective engagement could defuse the threat Trump poses and change the course of history.

The full text of the article, published here on 7 February 2017, is below. 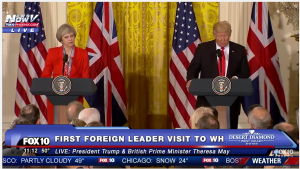